It’s  that time of the year where the kids are out of school and the days are hot and long. Time for a daytrip count down !!!!

Where to take the offspring to have fun and maybe even learn something on the way …scary I know.

But Germany has lots of fun stuff to offer and with all the fests, fairs and events going on, I am sure we can keep everyone occupied.

So here we go,

For starters I have a lovley Mittelaltermarkt

For more information check out their site :

As second Trip I would like to recommend the Frankfurt Naturemuseum Senckenberg.

The Naturmuseum Senckenberg in Frankfurt is the second largest museum of natural history in Germany. It is particularly popular with children, who enjoy the extensive collection of dinosaur skeletons: Senckenberg boasts the largest exhibition of large dinosaurs in Europe. One particular treasure is a dinosaur fossil with unique, preserved scaled skin. The museum contains the world’s largest and most diverse collection of stuffed birds with about 2000 specimens. In 2004, almost 400,000 people visited the museum.

The building housing the Senckenberg Museum was erected between 1904 and 1907 outside of the center of Frankfurt in the same area as the Johann Wolfgang Goethe University, which was founded in 1914. The museum is owned and operated by the Senckenberg Nature Research Society, which began with an endowment by Johann Christian Senckenberg.

Diplodocus longus dinosaur model and columnar basalt in front of the Senckenberg Museum.

Today, visitors are greeted outside the building by large, life-size recreations of dinosaurs, which are based on the latest scientific theories on dinosaur appearance. Inside, one can follow the tracks of a Titanosaurus, which have been impressed into the floor, towards its impressive skeleton on a sheltered patio.

Attractions include a Parasaurolophus with its crest, a fossilized Psittacosaurus with clear bristles around its tail and visible fossilized stomach contents, and an Oviraptor. Big public attractions also include the Tyrannosaurus rex, an original of an Iguanodon, and the museum’s mascot, the Triceratops. 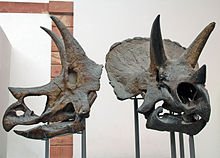 Although the dinosaurs attract the most visitors due to their size, the Senckenberg Museum also has a large collection of animal exhibits from every epoch of Earth’s history. For example, the museum houses a large number of originals from the Messel pit: field mice, reptiles, fish and a predecessor to the modern horse that lived about 50 million years ago and stood less than 60 cm tall.

Unique in Europe is a cast of the famous Lucy, an almost complete skeleton of the upright hominid Australopithecus afarensis. Historical cabinets full of stuffed animals are arranged in the upper levels; among other things one can see one of twenty existing examples of the quagga, which has been extinct since 1883.

Since the remodeling finished in 2003, the new reptile exhibit addresses both the biodiversity of reptiles and amphibians and the topic of nature conservation. An accessible rain forest tree offers views of different zones of the rain forest from the ground to the tree canopy and the habitats to which the exotic reptiles have adapted.

Any cookies that may not be particularly necessary for the website to function and is used specifically to collect user personal data via analytics, ads, other embedded contents are termed as non-necessary cookies. It is mandatory to procure user consent prior to running these cookies on your website.